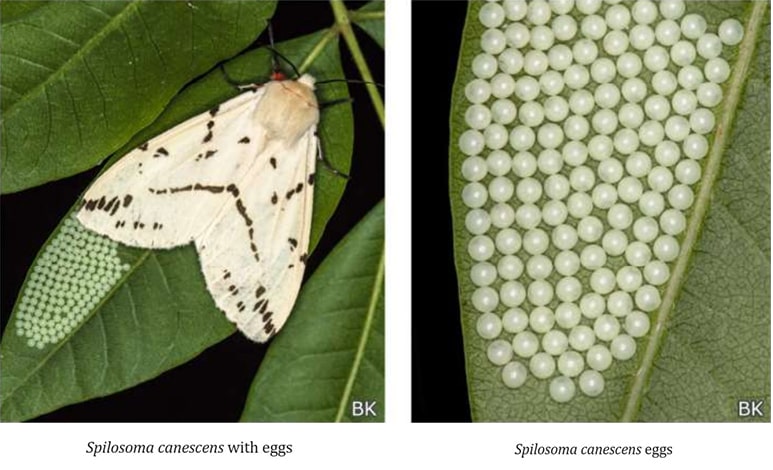 Eggs vary greatly in structure, size, and colour. They may be smooth or have patterns of raised ridges that can only be seen under magnification, and sometimes other projections. Each egg has a micropyle, an opening that allows the sperm to enter the egg just before it leaves the female’s body. For the more primitive moths, and also for the Geometridae, the egg is partially flattened with the micropyle on the narrow side; for the more advanced moths, the symmetrical egg is usually placed upright with the micropyle at the top.

The egg relies on its small size and the care with which it is placed by the adult female for its survival, and it provides for a high multiplication rate.

Eggs are deposited in many ways, including hidden in cracks in bark using a probing ovipositor; left as a mass in an exposed position protected by scales from the female’s abdomen; scattered while in flight; or simply left in a group in an exposed position. Eggs that are scattered during flight are usually tiny and very numerous, even in the tens of thousands in large hepialids.

The incubation period is usually from a few days to a few weeks, although in dry or cold conditions the eggs may enter a resting state (diapause) until another season.